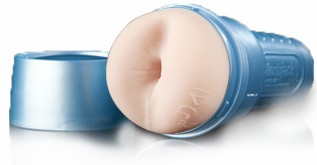 This texture will grip and tug at your cock as you thrust in and out.

Inside the Fleshjack Paradise canal are situated a total of ten very distinctive wavelike cross-ribs which subdivide the canal into eleven small chambers. For experienced Fleshjack users, this texture concept is immediately reminiscent of the Wonder Wave canal of the Fleshjack Originals series although with a larger number of chambers and ribs (14 each) and with less distinctive cross-ribs.

The Fleshjack Paradise canal starts with a 0.6 inch (15 mm) tight bell-shaped entrance passage and then the canal widens to a diameter of 0.8 inch (20 mm). The inner surface is completely covered by 0.4 inch (20 mm) wide cross-ribs in distances of 0.8 inch (20 mm). These cross-ribs have a wavy shape and are double-rowed, meaning that a second smaller wave is situated on top of each wave. At the highest point of each double wave, the inner canal tightens to a diameter of 0.55 inch (15 mm). As a result, the cross-ribs form a system of eleven chambers, each about 0.6 x 0.8 inch (15 x 20 mm) in size.

The description given here made me think that this would work for me but unfortunately it's too tight and the texture is too aggressive. I only feel the inner tighter rings and they are much too prominent for me. It also felt stiffer than the other sleeves that I like; perhaps it would have worked if the rings weren't so wide. I had high hopes for this sleeve but was disappointed. Read More

Prices are updated every 12 hours directly from the official store.
Check the Prices Tracking page for the latest Fleshlight Deals & Offers.

The description given here made me think that this would work for me but unfortunately it's too tight and the texture is too aggressive. I only feel the inner tighter rings and they are much too prominent for me. It also felt stiffer than the other sleeves that I like; perhaps it would have worked if the rings weren't so wide. I had high hopes for this sleeve but was disappointed.

Conclusion:
Thumbs down. Too tight and too aggressive of a texture.

I was very split on getting a sleeve from FJB site (you can get it with Joanna Angel mold now) not because it was molded from gay men butts but because butt orifices look kinda same-ish and doesnt appeal to me much ( i actually bought Forbidden with Stoya mold and i must say that one is pretty... nice, not sure if thats an exception, maybe ill get some more if they release some good texture for other girl).
The two i bought were Kevin Warhol's Charmer (now also Joanna's Angel Punk) and Daniel Chagall's Paradise, as expected it being butt molds didnt do anything for me, it couldve as well been generic small slits and it would feel the same...
The reason i decided to get them were very positive reviews (of now deceased) ThePowerHorse, who ranked both of them as 'must have'.

The Paradise texture being second (or thirs) top rated texture of all times on ThePowerHorse site... actually dissapointed me. Dont get me wrong, its actually good texture just ... Charmer (Punk) feels very similar and is simply better in every aspect.
The texture itself is much more ordered than Charmer (its actually not, both are repeating in some pattern), bit less intense (according to PowerHorse it was more intense, maybe its just me), texture looks nice on the picture but feels just like ordinary rings (i like rings).

Lube usage, cleaning and druing are pretty standard, bit easier than with charmer as there are no obvious holes.

Conclusion:
Generally good texture, bit more on the intense side and recommended to shorter guys as there are no varied sections...
... get Charmer/Punk cause its better.

I am not going to mess around here; this texture is so damn good! I have had so many FLights with it lately and every one of them have been just fabulous. It is very intense; I mean Bliss-like intensity. Each time I use it I end up just squirming all over the place from pleasure. Paradise just tugs at your cock head for what feels like a thousand times each stroke. While it looks like the Super-Ribbed meets Wonder-Wave, it really feels nothing like either. It has its own unique feeling that I just cannot get enough of! I usually never have two FLights within 15 minutes of each other but I have done that twice in the past two days. Every orgasm seems to last for so long and are very powerful. It has landed at the very top of my favorites.